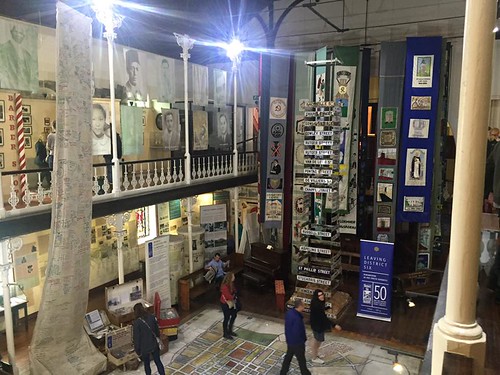 A central aspect of the program in South Africa is engagement with the themes of local history, politics, and urban planning through excursions, walking tours, and museums. Arriving in Cape Town late last week from Johannesburg, I was interested to understand differences in history telling between both cities and learn more about apartheid racial segregation and it impacts policies today. Cape Town’s demographics also bring up questions of how policies were applied based on racial categories: 42% of the city is defined as Colored. The colored people are often mixed race or descendents of Khoisan ethnic groups. 38% of the city is Black or African, 15% is White and 1% is Asian. As the Colored population is highest in the Western Cape where Cape Town is situated, it is important to investigate the importance of this distribution.

The first historical site our group visited upon arrival is the District Six Museum, a community memorial to the 1970s-1980s forced removals of 60,000 residents. District Six was a vibrant and racially diverse neighborhood populated with a high percentage of Colored people and mixed race families. At the museum I spoke to Noor, a former resident of District Six who provides tours to visitors. As a man of Indian and British descent he spoke of how the forced removals disrupted the fabric of the community. The Group Areas Act led to separation of families along the color lines since rezoned communities were divided by race with whites in affluent communities closer to the city center and Blacks and coloreds in farflung outward lying communities. He discussed the pass laws which made all residents carry passes designating race when traveling. As a colored man, he emphasized the relative privilege he had to his African comrades as he did not have to carry his pass all the time. Through the discussion of petty travel laws I made mental parallels to Jim Crow in the U.S and how facilities and transport were dictated by racial groupings.

Noor’s discussion of the trauma of losing a home as well as the community art and entertainment that existed prior to displacement emphasizes the retelling of the District Six people as grounded in dignified personal narrative and storytelling rather than chronology. The museum also has a space for education around housing issues in the city and has been instrumental in serving as a site of return for many past residents. As an interface between the past and present, the space is a “community museum” and a model for citizen engagement with local politics and movement building by social justice groups such as the Social Justice Coalition, Reclaim the City, and Ndifuna Ukwazi.

In the context of Cape Town’s “global city” atmosphere, I must underscoring the breath-taking natural beauty. I got a chance this past week to take a cable car up to the top of Table Mountain, the city’s landmark tourist attraction. Looking down to the city landscape during sunset and into the blue of the Atlantic ocean I could only reinforce the contrasts that define Cape Town and many cities: rich, poor, black, white, beauty and dilapidation. A contrast marked by both historical inequity and future plans for inclusion through service provision and reconciliation of past trauma. Though history remains the same the future of this city is ever changing.

I am a 4th year neuroscience major engaged heavily in mentorship, civic leadership, and racial justice issues in Boston and beyond. I spent Summer 2015 in Ferguson researching race and citizenship and Spring 2015 and 2016 in Selma Alabama leading civil rights service trips. I am traveling to South Africa this summer on an urban sociology dialogue to learn about race, public space, and social conflict specific to the country's post-apartheid climate. I am fascinated by the complex issues cities and communities face and look to pursue a career in urban health as a physician and researcher. For fun, I dabble in graphic design and photography.