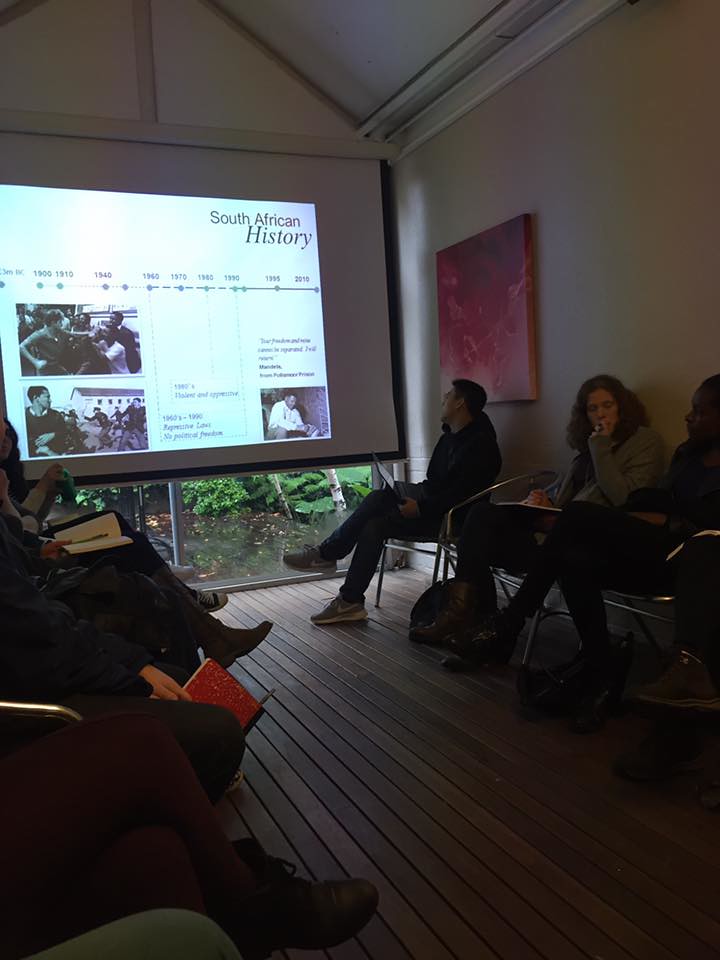 After a treacherous 6 hour flight to London then 11 hour flight to Johannesburg, our group arrived at O.R-Tambo Airport early Friday morning. We were greeted by our travel guide Sibu who briefed us on practices for retrieving money and general safety tips. From the airport itself I noted the diversity of South African residents and visitors, reflective of Johannesburg’s “global city” status.

Our day began with a walking tour of a nearby suburb, Newtown, lead by a local guide Sibu. Even on our bus ride over to the tour I was pleased by the how robust the infrastructure of the city was in the context of African nations. Bridges, organized highways, and multiple forms of complex transportation – bus and train, were available. This image of the city and the country as the most developed nation in Africa shows the impact colonialism – up until the apartheid has on the city today.

The walking tour brought us local history amidst the physical hustle and bustle of the city as we passed near local shops, public art, and glossy buildings. Jo-burg is infamously described as the economic and financial seat of South Africa; Sibu noted that this description arose from the gold which brought many to the region. The inner-city attempts at revitalization were intentional and tied to shifts in economic disparities. For example local businesses allowed artists to paint murals on their shop facades, particularly if the art matched what the store sold. On a whole, Newtown was a true cultural hub, bringing together tourism – the World of Beer and Museum of Africa, with local art and the informal economy, the trading and selling most common to African economic sustainability. Music was also a form of culture near to the region — we stopped by historical jazz clubs that served as hotspots for Black artistry during the apartheid. The idea of perseverance and celebration through struggle mirrors the work of the U.S Harlem Renaissance and the global importance of the jazz in empowering black resistance against inequity. Seeing the place Joburg has a cultural and economic hub only forces me to draw parallels to New York City, a familiar space of life, history, and racial resistance.

Walking away from this great first day, our group was oriented by Kara, a tour leader and white South African from Cape Town. This session did a great job of incorporating all aspects of South Africa’s history, health issues, and cultural practices. We learned of the many cultural groups and tribes in South Africa as well as the racial make up. I was surprised to learn that whites only comprised 8.9% of the population, which is powerful in the context of the apartheid where Afrikaners, white Dutch-descendant South Africans, established an oppressive political regime that controlled the majority. South Africa is a nation with eleven official languages, Zulu, Xhosa, English, and Ndebele to name a few, which are all part of the constitution which established the post-apartheid republic in 1994. I can only hope to pick up a few words here and there on my trip.
Through reflection on the wrongdoing of the apartheid and the practices of the Truth and Reconciliation Committee I garnered that South Africa is a country dedicated to truth and justice. From my experiences in Selma and Ferguson recognizing the gross and unpunished atrocities whites committed against Blacks in the U.S, I recognize that a big barrier to change is the inability to tell the truth in public. Seeing how a nation has moved to reconciliation through restorative practices underscores the value of truth telling through discomfort, pain, and privilege. I really look forward to understanding the essence of South Africa and the systems in which justice has been possible as well as the mechanisms which limit the full promise of a constitutional democracy.

I am a 4th year neuroscience major engaged heavily in mentorship, civic leadership, and racial justice issues in Boston and beyond. I spent Summer 2015 in Ferguson researching race and citizenship and Spring 2015 and 2016 in Selma Alabama leading civil rights service trips. I am traveling to South Africa this summer on an urban sociology dialogue to learn about race, public space, and social conflict specific to the country's post-apartheid climate. I am fascinated by the complex issues cities and communities face and look to pursue a career in urban health as a physician and researcher. For fun, I dabble in graphic design and photography.